Brain Cancer kills more Australians under the age of 40 than any other cancer, but receives less than five percent of all cancer research funding.

With an average five-year survival rate of 22%, doctors are pleading for additional funds to be delivered for research into brain tumour subtype treatment and clinical trials.

Associate Professor Kerrie McDonald, from the Lowy Cancer Research Centre said; “For the last five years the medical research fund has been capped… there has been no increase in funding”.

“The majority of the money is going to areas that the government see as the priority… there is a significant imbalance”.

A Survivor of brain cancer and volunteer with the Brain Tumour Alliance Australia (BTAA), Mr Stephen Newman is a strong advocate for brain cancer research funding.

Please continue by listening to Stephen’s story in the news podcast. 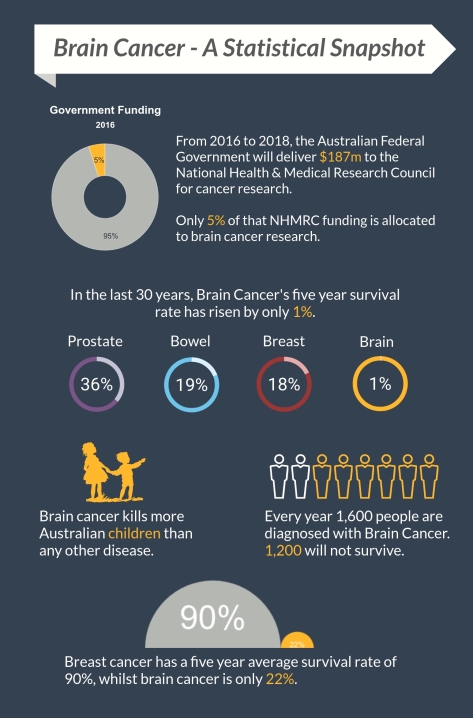 Associate Professor Michael Back from Royal North Shore Hospital believes achieving an increase in research funding is challenging given the competing demands for funding other types of cancer.

“The push for more funding is low… that is because the volume of people affected by brain tumours is low, compared to breast cancer [and other cancers]”, Professor Back explained.

Ms Christine Ross, a volunteer with the Love For Lachie Foundation added; “There is not a lack of people with the right skills [to conduct research], there is a lack of funding to be able to employ those people”.

The foundation was established in early 2016 in memory of 10-year-old Lachie Muldoon, who tragically lost his life to the disease in 2015.

“Brain cancer is the number one killer of children [In Australia]… our goal is to bring more trials, research… and hope for families with children diagnosed”, Ms Ross said.

Mr Newman added; “The answers are there, it’s just a matter of having to spend the money to get them”.